I am feeling a little better now that many members are contacting me to ask, “When are Jury Verdict and Bar Soap articles coming out?” I now have enough information to prepare both a Civil Jury Verdicts article, and a Bar Soap article. Having said that, I do still need information from all of you in order to write such articles.

People on the Move

Our practice continues to evolve in ways not imaginable just a few years ago. Big firms are going under in unprecedented numbers. Many lawyers are going out on their own. Some are just giving up. My take on it is that there are just too many lawyers, the economy has NOT picked up in the general legal market and overhead is killing many firms. We do know that law school applications are down and many licensed lawyers cannot find work as lawyers. Our firm’s recent ad for an experienced litigation paralegal produced scores of resumes from licensed lawyers. That appears to be the bad news. The good news is that attorneys are moving around, starting new practice areas, going to trial, practicing law and letting me know all that and more.

I’m giving our first plug to Stuart C. Gilliam because he reported his new move before anyone else. Stuart has opened his own practice in Pleasant Hill. He reports that he has left the insurance defense world to focus his solo practice on special education law. So all you insurance defense lawyers lamenting the change in that business, there is hope for you. Just ask Stuart.

Now more than just a rumor is that Gordon, Watrous, Ryan, Langley, Bruno & Paltenghi is dissolving. I do know Bruce Paltenghi has joined Bowles & Verna; I saw him since the move and he is enjoying his new firm. I have heard that Peter Langley is going out on his own. Let me know if you hear where the other firm attorneys are headed. Of course “the” Gordon is long gone and Tom Watrous long ago retired. I do see Tom on Wednesdays at bocce in Martinez, and he and I share the Coroner’s Inquest Hearing Officer duties here in Contra Costa County.

I’m always happy to see when one of our law clerks passes the bar exam and lands on her feet. The latest is Stacy Zhao, who attended Santa Clara Law and Santa Clara MBA simultaneously. She was admitted this past December and is currently practicing in Sacramento at the State Board of Equalization.

I hope you all saw the profile article of Elise Sanguinetti in the Plaintiff magazine. If not, take at look at the March 2014 issue (page 36). It is a wonderful profile on a wonderful person and a very good lawyer who got her start in Walnut Creek.

Thought I should mention a recent retirement at the Contra Costa County District Attorney’s Office. Hal Jewett started about the same time as me, and he just recently quietly retired. A brilliant trial lawyer, he rose to Chief Deputy and left with no fanfare. We hear about a lot of our colleagues in civil practice, but rarely of those who quietly and capably toil on our behalf in the public and government law sectors.

I have always argued that there is really no need for firms to have multiple offices in California, as the web provides instantaneous access to clients and courts. So our firm just opened offices in Willows, San Francisco and San Ramon, to go along with Concord and Davis (and we will be moving back to Walnut Creek from Concord by next year).

So what gives? Well, believe it or not, we are cutting our overhead in half and putting each of our lawyers where they spend most of their time. Erika Portillo works at our main office in Concord and in San Francisco. So, we have an actual (not a virtual) San Francisco office. Chris Teng has a large business client base in South County, as well as Walnut Creek. Will Portello lives in Davis and spends most of his time in Yolo, Glen, Colusa and Contra Costa counties. I get to spend time in all five.

Of course all of you have heard of the untimely passing of Mark Ericsson. He gave so much of himself. Every Bar committee I was ever on had Mark on it as well. He and I had a tradition of breakfast together about once a month in Lafayette. And he was a rich source of information for Bar Soap. I would call him when I heard rumors of people on the move and he always had the inside scoop.

We also recently lost another local character. I say “character,” because William (Bill) Everett Glass was truly a character. I first met him when I was a baby DA and he was a prominent criminal defense lawyer. We opposed each other on many big cases and always remained friends. He was the “Copo” on our bocce team going back to 1985 when I joined what was then “The Courthouse Gang,” now “The Balls of Justice.”

Five years ago, we knew something was up with his health, but it was not until his memorial service that we learned he was given just months to live back then. He survived another five years and never mentioned a word of it to his teammates. Of course, you should all know his true love was Cal sports. For years, he was the Memorial Stadium voice of the California Golden Bears football team and the Harmon Gym voice of the California Golden Bears basketball team.

So, speaking of people on the move (or not), Judge Judy Craddick has been on the DL; I hope she doesn’t mind me mentioning it. I suspect it is a result of the back-breaking job the Contra Costa Civil Judges have been forced into as a result of state court budget problems. Judge Steve Austin also hit a bump in the road recently during a busy court day. I heard he was on the DL for a week or so. I was in his courtroom for a CMC the day he fell ill. I too almost became ill listening to lawyers on Court Call. Don’t they realize that everyone can hear what they are saying? Whatever happened to “Quit talking while you are ahead”?

Okay, now that I am on a roll, I have enough trouble keeping my kids and their friends from using “like” in their conversations, but as I sat in a hearing the other day, a lawyer used it at least five times in arguing a motion. “And he was, like, not letting me talk, and I was, like, pretty upset.” So was he actually not letting him talk, and was the lawyer pretty upset? “Like” has become a four-letter word in our household, and should be so in court as well. Anyone disagree?

The recent 33rd Annual Contra Costa County Mock Trial Competition was a splendid event. Each year, eager and smart young people from our area high schools compete in the competition. I sat as a judge for two nights and I was very impressed. Many of our own Superior Court judges volunteered their time to act as mock trial judges, as did many members of the local Bar Association, but it was the students who really make it the great success that it is each year.

Speaking of students, make sure to accept if you are invited to a Career Day at your former middle or high school. I just spent an afternoon at Career Day at St. Joseph Notre Dame High School in Alameda. Yes, that was my high school. Students are very interested in the legal field, and it was satisfying discussing our profession with young people who have positive attitudes about the law.

I know I keep sounding like a broken record each year when “Super Lawyers” comes out with its list of local attorneys. Funny, at one time it was being AV-rated in a certain publication that was the mark of a top-notch lawyer. Among many civil lawyers it still is ABODA, but the public just loves having a lawyer who is a Super Lawyer. If you have been named a Super Lawyer, please let me know and I will mention it in a future Bar Soap article.

Congratulations to Stephen Steinberg as our new Bar Association Board President. Also congratulations to new board members Michelle Ferber and Katherine Wenger. We all complain of the work we must put in to practice law in this day and age. Now add in many board meetings and a regular life and you get some idea of the hard work and sacrifice our local Bar board members have signed onto in order to serve us. Thank you Stephen, Michelle, Katherine and all the other members of the board.

Please keep those cards and letters coming. Better yet, contact me by email with all your reports and rumors at mguichard@gtplawyers.com. 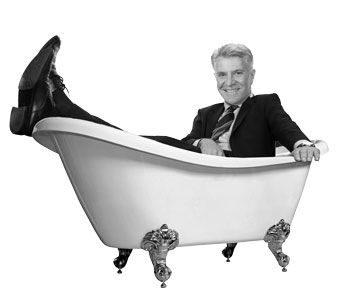